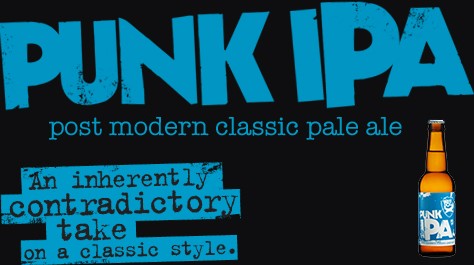 New on draft this week! BrewDog Punk IPA. £4.00 per pint (60p cheaper that BrewDog in the city centre!)  for this strong robust IPA 5.6%. Here’s how BrewDog describes it…

Our scene-stealing flagship is an India Pale Ale that has become a byword for craft beer rebellion; synonymous with the insurgency against mass-produced, lowest common denominator beer. Punk IPA charges the barricades to fly its colours from the ramparts – full-on, full-flavour; at full-throttle.

Layered with new world hops to create an explosion of tropical fruit and an all-out riot of grapefruit, pineapple and lychee before a spiky bitter finish, this is transatlantic fusion running at the fences of lost empires.

Nothing will ever be the same again.

Why not pop in for a refreshing pint of hop explosion. Perfect for a hot summers day.